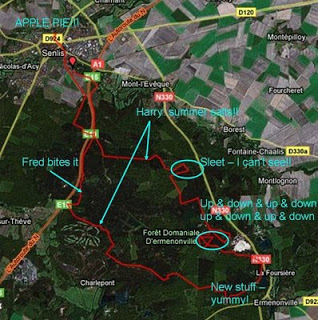 … well, if yesterday’s ride was all about flat and fast, todays’ ride was not. A 38km rollercoaster garnished with rain, sleet and snow, 3 spills and 580m climbed in a mere 2:38mins.

‘Tis the season to be jolly.

Harry, Romain and Fred set out at 14:00 towards “La Butte aux Gendarmes” which today seemed to be steeper than usual. It must have been due to the fact that it was humid on top of freezing. At the top we took a left to go through a little technical trail with a couple of rocky descents and steep ascents. Harry hadn’t been on this VTT for a couple of weeks so he was charged with a lot of extra “invincibility hormone” … and going down a very steep and rocky path it was he who took the first spill of the day. You should have seen the smile on his face!

Next, as we climbed a long hill it began to sleet; tiny little ice spheres about 2 mm in diameter. They made the climb pretty, but when it came time to blitz down the hard-earned descent we were dismayed to find out that our fun was slowed down by the sleet, which was painful to the eyes at high speeds.

Next stop: “La Mer de Sable”. We must have climbed 400 of our 580m around here, zig-zagging up and down and up and down various single tracks all around the park. To our surprise we were all able to climb some steep sections that have forced us on foot these last couple of weeks. Mostly due to fact that the mud was completely frozen and offered awesome traction! We are definetly improving our technical riding skills. Cool.

From “La Mer de Sable” we headed South towards Ermenonville. Now, most people would have taken the asphalt road, but no, not us, not today … up and down and up and down some more through some cool little technical sections that Romain used to call “home”. We didn’t dwell long, but there is definetly a waypoint on the GPS!! We’ll have to come back and explore.

To finish things off we hooked into the track from two weeks ago and blazed along the barb wired fence all the way to “the golf course”. Harry was unstoppable!! (except for a little face plant as he missed a corner)

By now two hours had gone by and we hadn’t put our feet on the ground yet, it was wet and cold … time to go home. We decided to take the B-Line and follow the highway. As we were going down the asphalt at about 23kph we hit black ice on the road and Fred went down. Hard. The rest of the ride was a total white knuckle experience as the path was completely covered in ice and it was very hard to keep the bikes going straight, even on the dirt paths.

I really enjoyed the ride. It was fast, hard, techinical and quite unusual, but I must admit that the best part was when I opened the door to the warm house and smell freshly baked apple pie!!