Sooo … did anyone go out on Sunday?

Where was the VC Senlis at 9:00 on Sunday morning?

Fabrice (the treasurer) was under the covers … too cold he says. Bahhh
Patrick? (the secretary) Still passed out drunk on his couch, victim to a Parisian night out – at least that is a good excuse!!
David? (Mr. President) Well, he WAS sleeping, but the friend VCSenlis crew didn’t let that get passed 9:10! Sleeping is for the dead!! Wake up Dave!!

So who was there?
Romain2 with a 36kg BH
Pascal who wanted a break from riding with Fred(2)
Fred(2) who wanted a break from riding with Pascal
Fred with his silly camera hanging off the side of his head
Harry, ready for total annihilation
Regis, who forgot his helmet
Manú who hasn’t been on a bike for two months and yet goes faster than all of us (no, not you Harry, you are the fastest)

We also had two guest:
Angelo who suffers from flat tire syndrome (which is good … otherwise he is tooooooo fast)
Pablo who debuted his mountain biking career with a 40km ride and sub-freezing weather with a bunch of veterans (and survived quite well!!!!)
Ohhh, yeah, and did I mention that we ran into Fred(2)!!!

it was a typical VCSenlis ride with lots of fun single tracks, getting lost (GPS anyone???), a couple “ateliers techniques” and LOTS OF FUN!!

You don’t believe me? Click on play to see what you missed!! 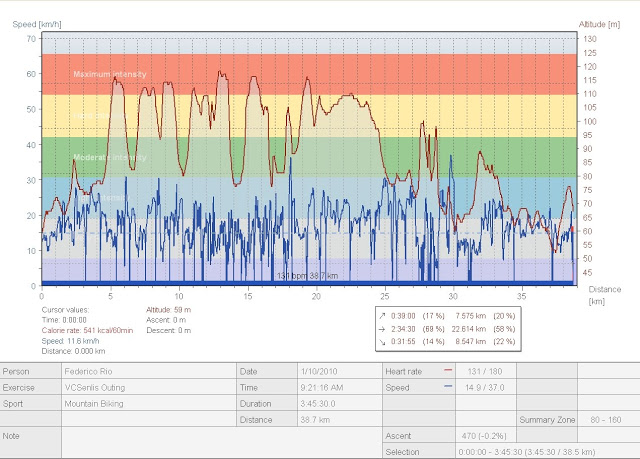 Some of us seemed to think that the whole ride was up hill, but according to the statistics above we only climbed for 20% of the distance (fun) … and went down hill for 22% (even more fun!!) !